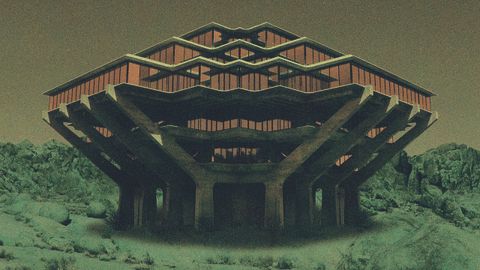 Explaining Finnish collective Circle to the uninitiated can be a bit like trying to explain cricket to someone who doesn’t know what a cucumber sandwich is. The first of their 51 albums, 1994’s thoroughly krautrock Meronia, was sung entirely in a made-up language. Then there was the time they changed their name to Falcon (Ex-Circle) to release a record of AOR-ish krautrock bangers, whilst also releasing a death metal album, Incarnation, under the name Circle with an entirely different line-up. They then, of course, changed their name to Circle (Ex-Falcon) for one record. And did we mention their last LP, 2015’s Pharaoh Overlord? Titled after one of their many side- projects, it was released simultaneously with the Pharaoh Overlord album titled Circle. Oh, and they basically invented the New Wave Of Finnish Heavy Metal, which is exactly what you think it is, except more day-glo than you can possibly imagine.

The group’s live show, however – a wild, six-headed Rocky Horror Show- in-polo-shirts explosion of psychedelic threat and gloriously camp theatrics – has remained relatively stable; eschewing whatever genre they may have last ventured into, they revel in a glorious sonic maelstrom something like Judas Priest meets Queen meets Can. Perhaps the most surprising thing about Terminal, is that it’s this side of the band that’s finally been committed to record. Not that there’s anything straightforward here, though. Opener Rakkautta Al Dente is a 13-minute excursion through fuzzy, cyclical krautrock riffs, blissful, improvised meanders and wailing heavy rock – like eight of your favourite records being played one after the other, with no discernible gaps. It’s a technique the Finns apply liberally throughout, using ultra-repetition as a meditative hum to stitch all ends of their heavy cosmic blanket together. The title track indulges in some pure Stooges love, if the Stooges were fronted by Michael Rother, while Saxo’s monastic chanting evolves into barking trad metal before emerging into soaring, epic alt-pop with near-operatic vocals. If any of that makes any sense you’ll adore Terminal.