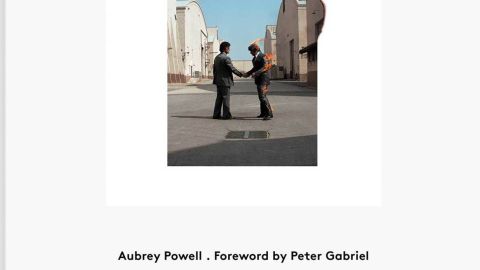 “Good design would always create interest – whether or not it had anything to do with the lyrics, the band image or the music,” observes Aubrey Powell in this absorbing account of his time with Storm Thorgerson, and later Peter Christopherson, who as Hipgnosis reigned as the album cover design agency from the late 60s to the early 80s and the arrival of the CD age. Lavishly illustrated, Powell’s wry commentary provides an insightful account of their foundations built largely upon finding themselves being in the right place at the right time. Very much in the spirit of naive gentlemen adventurers he describes the somewhat haphazard process of making up their distinctive visual vocabulary as they improvised from one job to the next. Mixing technical detail and the benefit of hindsight, while clearly affectionate and often impressed, he’s also unflinchingly critical of some of the creative choices their younger selves made.

They were the spirit of naive gentlemen adventurers.

He describes a time when the art of marketing seamlessly developed into the marketing of art, when money and imagination were enthusiastic bedfellows rather than the recriminatory ex-lovers they’d later become. As confidence and budgets grew, nobody thought twice about jetting off to the Sahara or Monument Valley for an afternoon’s shoot. The epic scale of the sleeve to The Nice’s Elegy, with 120 red beach balls dotted towards the disappearing horizon of African sand dunes appears now like some exotic, fabulous relic of the days before the world was shrunk to a mouse click in Photoshop.

To their credit, ‘the Hipgnosis vibe’ isn’t restricted to high-rollers such as the Zeps, Floyds, and McCartneys. Their intense, capacious imaginings grace the covers of lesser mortals. Po convincingly makes the argument that they were at their best when left to get on with things themselves rather than executing the back-of-a-fag-packet designs dreamed up by some of their more famous clients.

Having the covers collected into one place is akin to an alternative family photo album; you can’t help but recall where you were and who you were with when you first heard or bought one of the record sleeves featured. And there’s always the occasional awkward and ill-fitting fashion item or dodgy uncle that’s best forgotten: Bunk Dogger’s 1978 release, First Offence anyone? ‘Iconic’ is undoubtedly one of the most over-used words in any kind of assessment of popular culture. Yet when it comes to evaluating the work of Hipgnosis it’s the only one that gets close to describing the scale of their achievement.