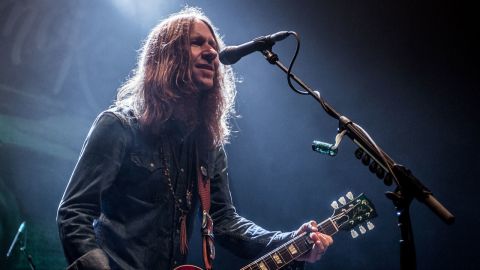 The London venues Blackberry Smoke play get bigger with every tour. They’ve upgraded from the 220-capacity Barfly to The Forum — a hall that can hold over 2000 — in almost exactly two years. They’ve followed a Top 40 live album with a Top 20 studio record. Everything is pointing comfortably north, and the only thing they apparently have to worry about is their support band.

The Record Company (dreadful name, but we’ll get used to it) are threatening to steal The Smoke’s thunder entirely. A Los Angeles-based blues-rock trio pitched somewhere between Johnny Winter and John Spencer (with a little Bo Diddley tossed into the gumbo), they move from virtual unknowns to literal heroes by the time their fizzing 30-minute set clatters to a climax. The audience are bellowing along, guitarist Chris Voz looks like he can’t decide whether to delightedly throw his guitar to the crowd or deliriously smash it to bits, and there’s a rush for the small number of EPs the band are stocking at the merch desk. Watch this space, we very much suspect.

Blackberry Smoke aren’t as overtly exuberant, but there’s an easy, low-key swagger to the band’s performances these days. The opening Leave A Scar (the song that started the Barfly show) and Six Ways To Sunday are a statement of intent, setting the tone for much of the night. As one songs fades, the chords to the next start. Introductions are minimal, but the music really does do the talking — the band have reached the stage where it all sounds like a greatest hits set, and the merest hint of an opening chord prompts cheers of recognition. Let Me Help You (Find The Door) and Good One Comin’ On are rousing, anthemic blasts, but it’s when the band move away from the no-nonsense rockers that things get really interesting. The Whippoorwill and the following One Horse Town both process the kind of yearning poignancy that comes with fearless, grown-up songwriting, and both are performed with a relaxed, confident grace.

There’s a pair of Zeppelin covers - Sleeping Dogs segues seamlessly into an epic churn through Your Time In Gonna Come, while The Rover pops up during the encores — but it’s the band’s own material that lives longest in the memory. An exultant Ain’t Much Left Of Me finishes the evening, the house lights come on, and Creedence pumps from the speakers as the audience exits. Next time, we’re gonna need a bigger room.