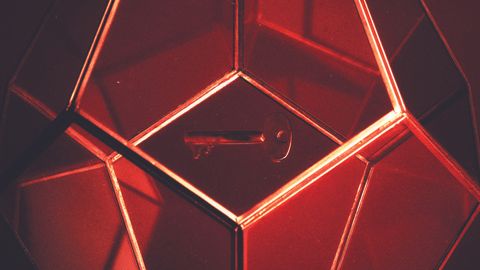 So, will Danny’s return to the fold mark a swing back to the ’Knot-meets-Crüe swagger of From Death softwareuiphraseguid=“7691caaa-afb8-4c8f-97f2-a1f31df1f5ae”>To Destiny, or the ‘classic Asking’ approach of The Black? The answer is neither. While the direction of Asking Alexandria’s fifth studio album will delight some and bemuse others, what it undoubtedly represents is a step forward and upwards, shamelessly pumping out the kind of anthems fit to fill big, big spaces. It’s not like the quintet aren’t already masters of a great chorus, but make no mistake about it: this is Asking Alexandria going Full Arena Rock.

The opening moments of Alone In A Room are swathed in the band’s trademark glistening, high-end production, as ultra-polished riffs duel with smatterings of synth and Danny’s vocals switching from Issues-style r’n’b crooning to searing rock’n’roll wails. ‘I’ve been away, a little while/Sometimes I can’t control myself’ he laments – a very personal opening gambit that sets the tone for what is evidently a very personal record for the singer. Lead single Into The Fire follows and is similarly big and bombastic, and a definite highlight – those all-important ‘Woah-woahsoftwareuiphraseguid=“f82764a0-569d-43e5-b717-6564d393b254”>’s built for big-ass festival crowds. Hopelessly Hopeful and Where Did It Go both feel a little more throwaway and wishy-washy, taking the foot off the pedal without adding any extra layers or depth, but Rise Up picks things up again in style. Feeling closer to the From Death To Destiny era in tone, it’s a chest-beating, fire-breathing beast of a song, with Danny in particular on blazing form as he roars, screams and bellows his way through a track filled with the kind of stomping, obnoxious riffs that made his last record with the band such a snarling knockout.

When The Lights Come On is a bit more of a departure for the album and may point to where Asking Alexandria see their long-term future, dipping so far into straight-up pop melodies that it sounds closer to a Fall Out Boy b-side than any of the York crew’s usual, heavier reference points. Under Denver is the token power ballad – cheesier than Hulk Hogan’s theme tune, wetter than a frog’s arsehole and absolutely drenched in synths, yet so irresistible in its execution you’ll find yourself reaching for the nearest lighter. Vultures is an acoustic driven outlaw ballad that seems to tick Danny’s penchant for that kinda thing, but it works well, while Eve is another rare moment that dials up the heavy (and the screams), classic AA-style. Empire is a misstep; limp, drab and featuring a cameo from rapper Bing that misses the mark, it feels awkward and forced and just doesn’t work. Luckily, it’s sandwiched between I Am One’s full-pelt rocker and an epic closer in Room 138 that ends the album on a triumphant high note – and another sign of their grand ambitions. Ultimately, then, Asking Alexandria isn’t a throwback or a sidestep – it’s a whole new animal, and it’s gonna need a bigger zoo.