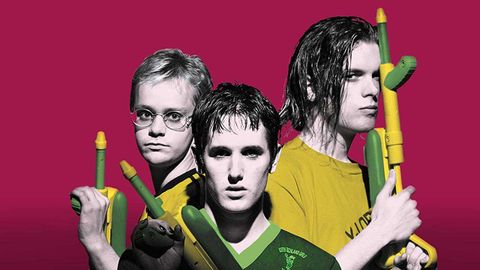 The initial mid-90s explosion was glorious: not since The Undertones or perhaps Supergrass had a bunch of teenage ne’erdo-wells managed to capture the sound of being young – the excitement, the numbness, the spills, the chase – quite so well.

Effortless two- and three-minute pop classic followed two- and three-minute pop classic effortlessly: Kung Fu, with its whiplash-smart opening sound effects; Oh Yeah; the pop pantheon-referencing Goldfinger; the riotous and wonderfully open Girl From Mars, of course… This was a teenage (moon) dream, lashings of loud guitar and noise and feedback, a brilliantly simple way round a three-note melody, boys you wouldn’t mind taking home to meet your parents.

And it didn’t hurt matters that in frontman Tim Wheeler there were baby blues to lose your heart to. Charlotte Hatherley joined in 1997 as second guitarist and vocalist – and the immediate result was grunge classic A Life Less Ordinary, a song to sum up the tumult of the mid-90s like few achieved.

Then somewhere along the line it all went a bit haywire. The pressures of fame coming at such a young age and constant touring took their toll. Wheeler disappeared in 1999 for a short time, then re-emerged in New York with a disturbing, self-deprecating video for Numbskull.

The band nearly went bankrupt, and retreated to Wheeler’s parents’ house in Downpatrick – where the band first began – to begin work on what would be their 2001 album Free All Angels. Its lead single, the somewhat ordinary Shining Light, won an Ivor Novello award the same year, and with that album Ash were back at No.1 in the charts.

How long can a band stay teenage? A very long time, it seems.

Hatherley left in 2006, the band’s music featured in Shaun Of The Dead and various video games, and if they did sound like a third-rate Oasis on occasion (c.f. 2004’s Starcrossed) and their ventures into dance territory felt rather ill-advised (2007’s Return Of White Rabbit), no one really minded cos they were ours.

How long can a band stay teenage? Listen to the nostalgia-fed grunge classic All That I Have Left from their most recent album, 2018’s Islands – a little bit of Teenage Fanclub here, a lot of Ash there – and you can hear a direct trace to the inflamed Wildsurf from Ash’s 1998 album Nu-Clear Sounds.

Long may they stay young.