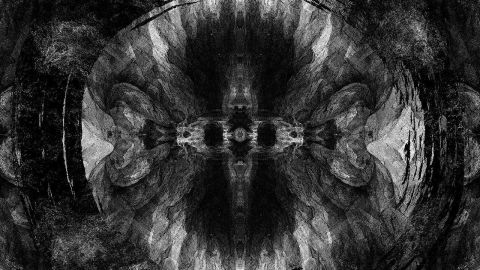 Earlier than everyone was expecting, Architects return with their first full-length since the tragic death of guitarist Tom Searle in 2016. A visionary talent, Tom was the backbone of Architects’ songwriting, and a key figure in elevating them to the upper echelons of British metal with their visceral yet poignant anthems of defiance and survival – themes that permeate throughout new album Holy Hell. Tom is very much a part of this record, not least in the emotionally devastating Doomsday, which he co-wrote, but for the very real, palpable sense of sorrow and struggle pulsing through the album’s veins.

Architects shed their skin, bare all and unleash two years’ worth of grief that’s been bottled up inside. It’s therapy, it’s catharsis, exorcising demons through 11 tracks of metallic mayhem steeped in sadness and aggression toward the worst moment of their lives. Each songtitle relates to religion or death, almost sarcastically suggesting that even faith can’t stop the inevitable.

Drummer Dan Searle has said that Holy Hell is about pain, and the lyrics explore this concept in many forms. Lead single Hereafter highlights the weakness and heartache felt by the band, ‘fighting with broken bones’ and spending ‘my fair share in the deepest depths of despair’,  but this display of fragility shows the band’s willingness to continue, through strength and unity, knowing that – as the opening track states – death is not defeat. You can hear the anguish in Sam Carter’s voice as he sings these words, but also an underlying resilience, never giving up, shredding his larynx with barbed-wire screams and expansive choruses guaranteed to fill any room Architects walk in to.

Yet Holy Hell is not a direct continuation from All Our Gods Have Abandoned Us, intensifying the Gojira and Meshuggah-style instrumentation, giving the record a frenetic, more techy edge on the likes of Damnation before Modern Misery comes in with a riff designed to make you ‘do the face’. Those wanting a selection of lung-bursting metalcore anthems might have to work a little harder to get the most out of Holy Hell, as it’s not as accessible as the previous two records and lyrically it can be a hard listen; this is a record as heavy sonically as it is on the soul.

The band also introduce electronic and string elements throughout the album, utilising high-end production to add further depth to their ever-evolving sound, trying to just scratch the surface of what they’re feeling. But don’t go thinking this is mainstream-baiting; it’s a metal record, especially when the synapse-shattering sub-two-minute The Seventh Circle snaps your neck into pieces.

Holy Hell isn’t the best Architects album, but it doesn’t have to be. It deviates away from the previous two albums into something more fractured, missing the mark at times, but still able to deliver knockout blows when it counts. As Sam sings he’ll ‘always carry the cross’ on closer A Wasted Hymn, the emotional force of the previous 40 minutes strikes in the chest, flooding all senses, highlighting just how much of Tom is in this album and in Architects. It’s not perfect, but it’s a victory.