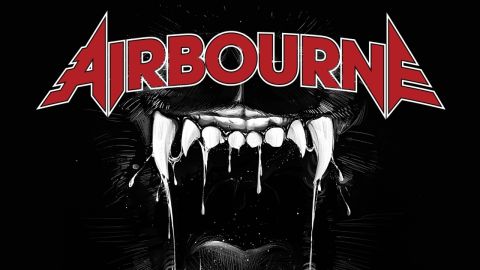 As much as open-minded music fans may crave originality and the breaking of new ground, there is a lot to be said for bands who simply deliver the goods with no extraneous fannying around or pompous attempts at reinvention. Airbourne have already proved themselves to be one such band. Regardless of its intrinsic qualities, good or bad, those of us who have thrilled to these Australian shitkickers’ first two albums arrive at their third safe in the knowledge that there will be no forays into dubstep, guest appearances from Lil Wayne or 12-minute epics based on classic literary works. This is rock’n’roll, folks, and its intentions remain as purely hedonistic and gleefully dumb as ever.

All that remains, then, is to work out whether Airbourne have made any significant changes to their raucous blueprint of AC/DC-inspired singalong ballbusters or improved dramatically on their achievements to date. Its title might seem to suggest the embracing of a slightly darker worldview, but in truth Black Dog Barking seldom strays from the path of righteous party rock.

Sonically this is a more powerful and polished affair than 2010’s No Guts. No Glory, but without the everything-in-the-red dynamic myopia of 2008’s Runnin’ Wild. A ridiculously urgent and exhilarating live band, Airbourne clearly want to capture the feral energy that powers their gigs, and while producer Brian Howes is best known for his work with abominable crud like Nickelback and Puddle Of Mudd, he has wisely allowed this band to retain their untamed muscularity and irresistible rough edges.

The floored accelerator firestorm of the opening Ready To Rock says it all in four breathless minutes of heavy-handed and abrasive riffing and yobbish gang vocals; this is the sound of skilled musicians having fun and focusing more on whipping crowds into a drunken frenzy than on any desire to show off. And, like everything here, Ready To Rock has a chorus that takes seconds to memorise and a lifetime to shake off.

There are a couple of moments on Black Dog Barking that point to a moderately broadened compositional outlook, most notably the Kiss-tinged Animalize Me and the Bon Jovi-with-booze-and-balls bluster of A Woman Like That, but every last riff and hook sounds so natural, unforced and passionately played that it is hard to imagine that Airbourne have spent much time analysing their own songwriting. Songs like Firepower, Back In The Game and the lobotomised sprint of Hungry start, kick arse for a few minutes and then finish, leaving both band and listener in a sweaty, sated heap. The lack of any noticeable filler only serves to heighten the sense that Airbourne are seriously fucking good at this stuff and deserve every accolade and career triumph that comes their way.

Ending with the brutal stomp of the title track, Black Dog Barking will not change the world or take you anywhere you haven’t been a thousand times before, but it rocks like a bastard and works perfectly as the soundtrack to a summer of beer-sodden revelry. What else really matters?