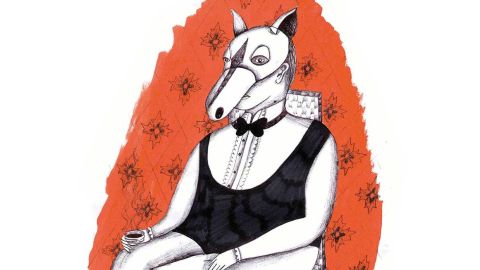 The third release from Southampton’s Horse finds them in a typically idiosyncratic and sonically adventurous mood on this five-track EP.

Underpinned by the energetic power trio of Benjamin Short (guitar), Russell Mann (bass) and Mike Stringfellow (drums), new vocalist Hayley McDonnell’s cut-glass diction is a serene still point amid tunes that are knotty and fractious yet also revel in an ebullience that’s almost carefree. Possessing an appealingly quirky logic that thinks nothing of leaping between barbed, bulldozing riffs to delicate introspection, there are moments occasionally evoking the melodicism of classic-era Yes or some of Crimson’s more feverishly angular episodes. However such comparisons are but fleeting signposts, as AFH are very much their own beast. Though the galloping guitar lines that effortlessly traverse shifting meters might well bear all the expected hallmarks of an avant-rock sensibility, they also possess the wit and capacity to perform vibrant, uplifting tunes. When, during Made In Chelsea (Apocalypse in 15⁄8) McDonnell’s voice, with a slightly manic edge, implores ‘Adore me’ through tempestuous forces generated by the band, it’s a command that’s impossible to resist.