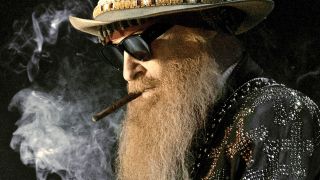 The collection of original tracks and classic covers is titled The Big Bad Blues and it’ll arrive on September 21 via Snakefarm Records.

And to mark the announcement, Gibbons has shared a lyric video for the lead single – a cover of Muddy Waters’ Rollin’ And Tumblin’ which can be watched below.

The follow-up to 2015’s Perfectamundo was co-produced by Gibbons and Joe Hardy and recorded at Houston’s Foam Box Recordings.

Gibbons says: “We successfully made our way through those uncharted waters with the Cubano flavour of Perfectamundo and completed the journey.

“The shift back to the blues is a natural. It’s something which our followers can enjoy with the satisfaction of experiencing the roots tradition and, at the same time, feeling the richness of stretching the art form.”

The album features a total of 11 tracks with vocalist and guitarist Gibbons joined by Hardy on bass, Matt Sorum and Greg Morrow on drums, Mike ‘The Drifter’ Flanigin on keyboards, while James Harmon contributes harmonica to the record.

Gibbons is expected to announce a run of tour dates in support of the album in the near future.

The Big Bad Blues is now available for pre-order. Find out further details below.

Billy Gibbons - The Big Bad Blues
ZZ Top's Billy Gibbons is back with his first solo album since 2015's Perfectamundo, featuring a collection of original tracks plus some classic blues covers including Muddy Waters’ Rollin’ And Tumblin’. View Deal