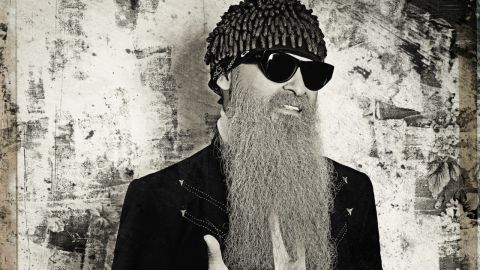 There’s a famous story that Billy Gibbons tells about Jimi Hendrix, from the days before ZZ Top were formed. In the late 60s, when Gibbons was still a teenager, his psychedelic rock group The Moving Sidewalks opened for Hendrix on a US tour, and Jimi was so impressed by the young guitarist that he taught him how to play his song Foxy Lady, bending the strings just so.

What remained little known, until now, is that Billy Gibbons was also schooled by another legendary virtuoso: not a guitarist, or even a rock’n’roller, but the legendary ‘King Of Latin Music’, Tito Puente. Born in New York to Puerto Rican parents, Puente was a master of Latin jazz and mambo music, and from him Gibbons learned the rhythms played on congas, bongos and timbales.

This influence is at the heart of Perfectamundo, Gibbons’s first solo record, on which he’s backed by The BFG’s, a collection of musicians with roots in Puerto Rico, Cuba, Argentina and the US.

What Gibbons has created with this album is a seamless blend of North American music – principally blues, soul and rock’n’roll – with the rhythmic sensibilities of Central America. It’s not a new concept: Carlos Santana built his entire career on Latin-infused rock. It’s also in part an extension of what ZZ Top were doing on significantly titled 70s albums such as Tres Hombres and Tejas, where the trio’s blues-and-boogie combo came with a little added spice from south of the border. But with Perfectamundo, Gibbons has gone the whole hog with that pan-American vibe.

This much is evident from the get-go, with the album’s opening track, a cover of Louisiana bluesman Slip Harpo’s Got Love If You Want It. There are echoes of ZZ Top in Gibbons’s growling voice, his gnarly riffing and stinging lead breaks, but the percussive groove takes the song to a different place. And that groove is what drives the whole album, through swinging cocktail-hour tunes Hombre Sin Nombre and Piedras Negras to the funky, Green Onions-inspired finale, Q-Vo.

Gibbons has made this a contemporary-sounding record, just as he did, brilliantly, with ZZ Top’s 1983 hit Eliminator. This works with his voice Auto-Tuned, if not with the hokey rapping on the album’s title track – an unexpectedly bad move, given how cleverly ZZ Top reworked a hip-hop song on 2012’s I Gotsta Get Paid.

But aside from this one minor flaw, Gibbons has totally nailed it with Perfectamundo. It’s what a solo project should be: a new adventure.