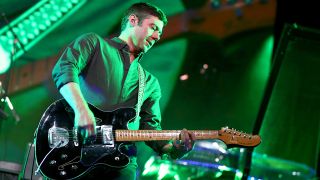 News of the collaboration emerged in February, with the Limp Bizkit guitarist posting a short clip of Barker with the caption: “Doing drums with the man himself Travis Barker on a yet to be titled new project!”

He’s now uploaded two more clips to Instagram, with the first showing Barker in full flow behind the kit, while the second has been filmed behind the mixing desk.

Doing it to it @travisbarker Wes Borland