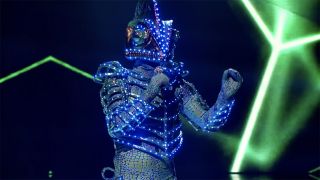 Justin Hawkins has appeared on UK TV show The Masked Singer dressed as a chameleon.

The hit ITV show was broadcast on Saturday evening and saw The Darkness frontman perform Cyndi Lauper's True Colors and Portugal. The Man's Feel It Still. In an earlier episode, the chameleon had performed Radiohead's Creep.

The judging panel, which included Rita Ora, Davina McCall and Jonathan Ross, were in the dark as much as the audience – and when Hawkins eventually took off his mask, the audience and panel reacted in shock. Watch the clips from the show below.

Hawkins says: “Keeping secrets is challenging, especially when you effectively disappear for the duration of the filming. I used a combination of bluffery, barefaced lies and vague muttering to explain my absences. I’m basically James Bond.

“I wanted to take part in something that would be slightly surreal, and the secrecy made it very exciting. Like having an extra-musical affair. I was reluctant to commit to the recordings because I was supposed to be best man at a wedding in Australia, but it was too good to turn down!

“The toughest part of the process was learning relatively modern songs. I’m not fond of new music, so I had to force myself to assimilate inferior compositions. Plus it was difficult to sing from within a helmet!”

He adds: “I was very pleased with the panel’s observations about my physique. It was so very flattering. The negative remarks were fully justified, I think I actually agreed with everything they said!”

The Darkness will return to the road later this month across Europe in support of their latest album Easter Is Cancelled, kicking off on January 25 in Strasbourg, France.

Last week, the band released a video for their new single In Another Life which starred TV personality and model, Abbey Clancy.