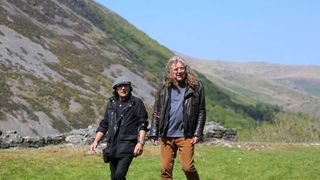 This week's episode of the US broadcast of Brian Johnson: A Life on the Road features the AC/DC singer interview former Led Zeppelin vocalist Robert Plant, and AXS TV have released a clip of the show in which Plant talks about the band's early days.

“I suppose Cream, The Greatful Dead, the white blues thing was kickin’ in," says Plant. "And you had that great west coast thing going on with Jefferson Airplane and stuff. You had a sub-culture develop, and we kind of attached ourselves to that.

"We didn’t have any social statements to make. We weren’t visionaries, in that sense. But we were, still by our age, at the time, still part of that huge movement of energy.

He continues, “I think for all of us, it was just serendipity that you could actually have four people… I mean me and Bonzo had played a lot together. Jimmy and John had been in various bands but they were session guys, and they were pretty well heeled, you know, pretty hot on the scene.

"But it didn’t matter to me and Bonzo, all we wanted to do was get a square meal."

The show was originally broadcast on Sky Arts in the UK back in 2017, but US viewers got the chance to see the AC/DC man interview some of the biggest names in music when it debuted on the AXS TV channel in July.

The channel acquired the first two seasons, which see the vocalist chat to music icons about life on tour and revisit locations that have helped define their careers.

Johnson says: “To sit and chat with my friends and heroes while filming A Life On The Road was ridiculous fun, and with no professional journalists around, you can feel the trust."

Brian Johnson: A Life on the Road airs Sundays at 9pE on AXS TV.