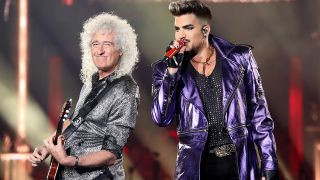 Queen and Adam Lambert stopped off at the Forsyth Barr Stadium in Dunedin, New Zealand, on Monday night on the latest show on their Rhapsody tour.

They played a 29-song set, peppered with classics including We Will Rock You, Another One Bites The Dust, Killer Queen, Hammer To Fall and Bicycle Race – and they even managed to squeeze in a cover of Led Zeppelin’s Whole Lotta Love.

Fan-filmed footage of the performance can be watched below.

The Rhapsody tour has now arrived in Australia, with Queen and Adam Lambert also set to perform at the Fire Fight Australia benefit concert at Sydney’s ANZ Stadium on February 16.

Money raised from the concert, which will also feature Alice Cooper, will go towards national bushfire relief efforts after swathes of the country were decimated due to wildfires which have raged across Australia since September last year.

Queen and Adam Lambert will bring their Rhapsody tour to the UK and Europe later this year.