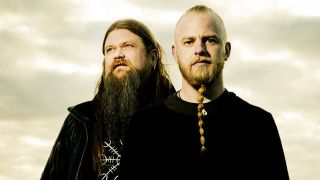 London By Norse, the three-day festival of Norse culture presented in conjunction with Metal Hammer and By Norse, is soon upon us, and with live shows by Wardruna, Enslaved and the UK debut of their collaborative Skuggsjá venture amongst its many attractions, Wardruna and Skjuggjsá frontman Einar Selvik has been talking to Metal Hammer about his his Norse awakening.

Shot in various locations around Oslo, including the Viking Longboat Museum where Wardruna played their first ever show, and with footage from the band’s performance at the Riksscenen folk music venue last Summer, Einar discusses the early interest in Nordic mysticism that was sparked by his father and how his search for understanding has driven him ever deeper into his country’s lore.

Taking place across various London venues from March 17-19, London By Norse will culminate in a live set by Skuggsjá, but will also feature three shows by Enslaved, split into different eras, to commemorate their 25th anniversary. The first show, at the Dome in Tufnell Park, will have Bergen’s progressive visionaries Vulture Industries as support while their second performance at the Underworld on March 18, will have Viking metallers Helheim as support.

Enslaved’s Ivar Bjørnson will be performing his dark psych/ambient solo project Bardspec at The Forge in Camden earlier that evening, while Einar will be presenting a workshop in the same venue where he will be going even deeper into the roots of Wardruna and presenting solo versions of Wardruna songs.

London By Norse culminates at The Coronet in Elephant & Castle on March 19, where black metal icon Kristian ‘Gaahl’ Espedal will be hosting an exhibition of his paintings, before Enslaved play their final set, Wardruna play a full performance and the two bands come together for the revealing of Skuggsjá.

Special merchandise will also be available at the shows, including the series of By Norse posters crafted by artist extraordinaire Costin Chioreanu, Enslaved merch based on the posters and various vinyl editions of the studio-recorded version of Skuggsjá.

London By Norse is guaranteed to be a magical event and some remaining day tickets are still available at the official website, along with the full program, background info on By Norse and and the artists involved.

Head to www.bynorse.com here, because no rune can protect you from a lifetime of regret!