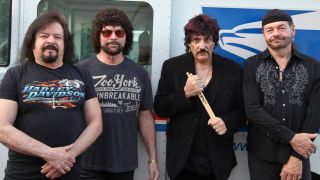 Vanilla Fudge mainman Mark Stein says he gave Led Zeppelin valuable advice when the rock icons were supporting his band in the 60s.

And while looking back at the late Sixties, Stein recalls Zeppelin supporting Vanilla Fudge – and he remembers having a few words of wisdom for the fledgling rockers.

He tells the Broward/Palm Beach New Times: “The first big tour we did was with Jimi Hendrix in 1968 and it was amazing. I got to hang out with Hendrix and to know him pretty well.

“When Led Zeppelin first came out in 1968, we broke them in. We headlined and they opened for us because we were label mates so we really got to know each other.”

He continues: “They were learning things from us. I remember telling Robert Plant to move around more and I suggested to Jimmy Page that he get some bigger amps. It may sound a bit condescending, but it’s a fact.

“Me and Carmine used to hang out with them all the time and party together. They told us they couldn’t wait to meet us.”