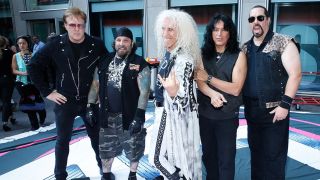 Twisted Sister could call an end to their career following the death of drummer AJ Pero, guitarist Jay Jay French has said.

The sticksman died while on tour with Adrenaline Mob in the US last week. And despite frontman Dee Snider saying the band will play on in his memory, French reveals they were already thinking about bowing out before news of Pero’s death reached them.

He tells Eddie Trunk: “On March 19, I had to call him because I had to bring him up to date on what’s going on with the band.

“I said, ‘We’ve got to sit down and plan what we’re going to do, because we’ve got this DVD in Vegas that’s supposed to be filmed at the end of May. And the band’s thinking about putting a plan together to figure out if maybe it’s time to bow out.”

And French says Pero told him that he was suffering from shoulder issues and that he would be coming off the Adrenaline Mob tour early to deal with the problem.

French continues: “He said, ‘There’s one thing you have to know. My shoulder’s been bothering me and I’m leaving the Adrenaline Mob tour. So when you hear I’m not on the tour, there’s no problem – it’s just my shoulder. I’ll get into rehab in the summer.’

“I think that shoulder pain wasn’t the muscle strain – it was indicative of something far worse.”

The guitarist will now sit down with Snider to discuss future plans – including whether 2016 will be the band’s swan song.

French adds: “We’re going to discuss the near term which is the concert in Vegas on May 30, then we’ll discuss getting through the shows in Europe this year.

“And then we’ll talk about the long term which is – Is 2016 going to be a statement year for us? It’s the 40th anniversary of me, Dee and Eddie Ojeda getting together. It may be time. It may be.”

He continues: “We are trying to confront the reality of it because I don’t want to be in this forever. We could – some bands are forever in that ozone area and continue to play on.