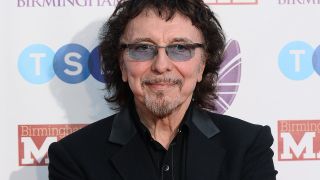 Tony Iommi says he’s coming up with new music ideas every day – and hopes that once the lockdown ends, he can delve deeper into a new project.

Iommi says: "Every night I play and put something down. I was due to be working now with my engineer Mike Exeter, but, of course, you can't have anybody in your house because of the lockdown.

“We’d planned to start putting some of the things I've got here down because I've got so much stuff. That was the original plan. Hopefully when it all clears up, we'll definitely be starting.

“I do have the bug to do something – certainly not world touring, but I do enjoy playing.”

Asked if he saw it as purely a solo project or if it was possible for him to bring in musicians from the Sabbath years, Iommi says nothing is “set in stone” at the moment and adds: “I’ve got a few ideas and a couple of big things that could happen.”

He continues: “I want to get Mike out and we’ll start putting down some drums, bass and guitar so we can make it like a proper band and then decide who I'm going to work with on it. I just want to have something to present to whoever I'm going to be working with. Or if not, at least have something that sounds reasonably good."

Iommi says he has CDs full of riffs, with some going back to Sabbath’s final studio album 13 which launched in 2013.

The guitarist adds: “And I've got so many more that I'd like to use. But I don’t tend to go back to them all the time. I’ll do them and put them away, because I keep coming up with new ideas.

“I should take the opportunity now while I've got to stay in the house of looking back over them and see what I've got. But there's so much stuff – I’ve got stuff that goes back for years.”

Last month, Iommi raised moire than £19,000 for Birmingham’s Heartlands hospital charity after he auctioned a number of personal items, including a a signed Epiphone SG.