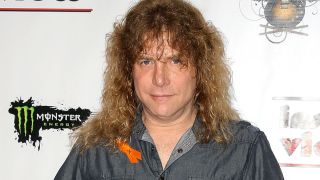 Former Guns n’ Roses drummer Steven Adler has been sober for 10 months – and says he’s aiming for a year away from drink before he goes back to work.

He’s been fighting addiction issues for years with varying results. His self-titled band cancelled all engagements in May last year, when he checked himself into a rehab clinic.

He said at the time: “I picked up a bottle and drank. This occurred a few times – and that’s a few times too many. Picked up the phone before it got out of hand, to get help. I kicked hard drugs several years ago and now it’s time to get rid of alcohol.”

Now Adler – who was fired from GnR in 1990 over his heroin use – tells the Lucas H Gordon Show: “Right now I’m just taking care of myself. I’ve been having these problems with alcohol and I’m taking care of it.

“I have a nice programme I’m working and I’m looking forward to having one year. Then next year I’m going to start work and get the band back together.”

He aims to get behind 2012 album Back From The Dead when he’s back in action. “I’m looking forward to going out and playing again,” he says. “Having a new life is exciting.”