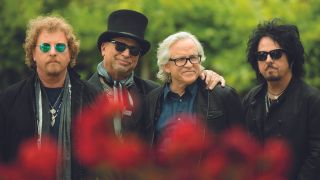 Steve Lukather says he’s not sure what the future holds for Toto after they wrap up their 40th anniversary tour this weekend – but he does know that the current lineup is at an end.

Lukather is joined in the lineup by Steve Porcaro and Joseph Williams, with keyboardist David Paich taking a break from touring last year.

The guitarist made the comments in an interview with The Morning Call ahead of the band’s show on Sunday evening at The Met in Philadelphia.

He said (via Blabbermouth): “I don't know what the future-future's going to be, but I do know that's going to be the last show in Philly for the foreseeable future – and certainly the end of this configuration of Toto."

As for the chances of Toto playing live again with a different lineup, Lukather adds: “I don't know. I can't predict the future. I can tell you that this version is dead on October 20.

“We’ve got to take a break from all this. We were beat up really badly and we’ve got to heal and figure out what's going on.

“I mean, the music's still there. I'm not saying I'm never going to play this music again. That would be stupid to say – that would be a lie. I can play whatever I want from my entire career with whomever I want to, and so can everybody else. But I don't know what that is yet.”

Toto representative Steve Karas later confirmed to Philadelphia Enquirer that Toto wouldn’t be calling it quits entirely and would simply be taking a break.

He added: “Future plans will be announced in 2020 as they unfold and become formal following what is a true break following the 40 Trips Around The Sun tour which has been on-going for more than two years now.”

Earlier this year, Toto documented the anniversary tour with the live release 40 Tours Around The Sun, which was released on DVD, Blu-ray, DVD/2CD, Blu-ray/2CD, 3LP, 2CD and on digital and streaming platforms through Eagle Rock.

The performance was captured in front of 18,000 fans at Amsterdam’s Ziggo Dome in March 2018.

Toto: 40 Tours Around The Sun
Toto's performance in front of 18,000 people at the Ziggo Dome in Amsterdam in March 2018 was captured specially for this release, featuring classic cuts including Africa, Lovers In The Night and Rosanna.View Deal