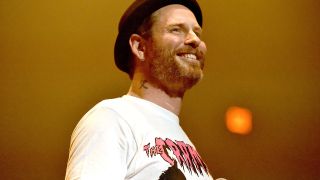 Corey Taylor says that he’d love to record a “dark jazz album” at some point in the future.

The vocalist has always shown an interest in different genres – from the heaviness of Slipknot and the more rock-orientated sounds of Stone Sour, through to covering R.E.M. and The Cure during his solo acoustic sets.

But asked by RadioVegas.Rocks’ Chaotic Radio if he’d ever record country music, Taylor replies: “Even coming from Iowa, fuck no! Absolutely not.

“Or, and I've actually been thinking about doing something like this, putting together a quartet or a quintet and doing a jazz album, like a dark jazz album and recording it live in a room.”

Taylor adds: “It won't sell shit. It would really just be for my own personal collection. I love jazz. A lot of people don't realise that. I listen to a lot of 40s and 50s jazz.

“There’s this haunting stuff that Billie Holiday would do, the older stuff that Charlie Parker would do when he was really fucked up – that would be the stuff that I would be closer to.

Taylor and his Slipknot bandmates are currently working on their new album, which is expected to launch later this year.