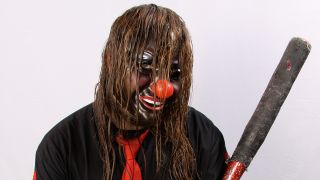 Slipknot's Clown has exclusively revealed to Metal Hammer that he has an album's worth of music, recorded during the All Hope Is Gone sessions in 2008.

As featured in the latest issue of Metal Hammer, when Slipknot recorded their fourth album, Clown was set up in another studio making different music with Jim Root, Corey Taylor and Sid Wilson. One of these songs Til We Die featured on the digipak release of All Hope Is Gone, but now the time is right to release more.

Clown tells Metal Hammer: "There’s a collection of songs that were recorded, 11 I think, I’ve held on to them for 10 years because it hasn’t been right, and I’m going to let you know now that it’s feeling right.

"Jim would write guitar then go down and play guitar on the album, then come up and finish playing guitar on the song. That’s how we’d kill time during those four months."

Clown adds: "There’s a big collection of music, it’s fucking really amazing. It’s so amazing it had to be held back to wait for the right time, it’s been 10 years. It wasn’t going to be one of those things to loosely go out and confuse everyone, and piss everyone off.

"I’m not going to put music out to spite people – we do things the right way in this camp. The right way is that sooner or later, people need to be made aware of it because it’s the truth. It happened. We spent time doing it, we worked it every day, we mixed it, we mastered it, there’s artwork. It’s amazing stuff. But it’s all got to be right in the story of Slipknot.”

Slipknot are releasing an anniversary edition of All Hope Is Gone on December 7.

The latest issue of Metal Hammer features world-exclusive interviews with Clown, Corey and Joey Jordison, telling the real story behind All Hope Is Gone.

The magazine is in stores now and available to buy from our online store.