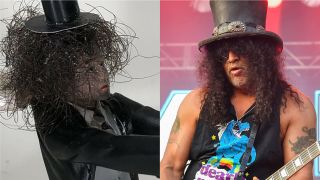 Unusual rock memorabilia isn’t anything new, but the latest item that has made its way on to eBay really takes the cake.

Yes, for just $3000 you could own what is reported to be a tangle of Slash’s actual hair - placed under a miniature top hat that once served as a wedding cake topper for when the Guns N’ Roses guitarist tied the knot with Perla Ferrar back in 2001.

The unusual sculpted plastic creation was sold on Julien’s Auctions last summer. Originally estimated to sell between $200-$400, it eventually went under the hammer for $1024 – attracting the attention of eight bidders.

Now the five-inch high model – complete with Slash’s now ex-wife – has appeared on eBay for thousands more than it sold for last year.

The description calls the item “one of the most unusual Slash items maybe ever” and we can only agree.

And we thought the sale of an old paper pizza plate once used by Nirvana’s Kurt Cobain for $22,400 was a bit bonkers.