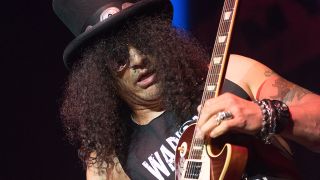 Slash has given his take on the persistent rumours that AC/DC have reconnected with Brian Johnson and Phil Rudd.

Speculation has been swirling since the estranged vocalist and drummer were spotted together in August last year outside the Vancouver studio where AC/DC have recorded several albums.

And asked by Consequence Of Sound what their apparent return means to him, the Guns N’ Roses guitarist says: “Where do I start? AC/DC is bar none, with the exception of the Rolling Stones, the greatest rock‘n’roll band ever.

“The Stones will always come first for me and then AC/DC. There are no other bands that actually play that brand of really 50s-influenced straight-up rock‘n’roll like AC/DC. I love them for that.

“I think Phil Rudd is one of the best drummers of all time. So any time he was not in the band, I was always disappointed. But it’s great that Cliff Williams is going to be back because I remember being backstage with those guys at the end of the last tour and him saying that he was gone and that he was retired.

“So it’s great that everybody’s back, but it’s especially awesome that Brian Johnson is back.”

There’s been no official word from within the AC/DC camp regarding their future plans – or whether Johnson, Rudd and Williams are definitely back in the lineup – although US radio host Eddie Trunk was recently told that the band were “absolutely going to tour with Brian back again."

AC/DC’s longterm engineer and mixer Mike Fraser said earlier this month that they had been in the studio “doing something.”