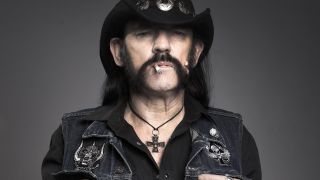 Anthrax guitarist Scott Ian has spoken about how smoking saved late Motorhead icon Lemmy from having some of his toes amputated.

Lemmy, who died in December 2015, spent much of 2013 recuperating from a series of health setbacks which included several weeks in hospital after he suffered internal bleeding. He’d earlier been fitted with a defibrillator to deal with heart problems.

As a result of his health problems, he was famously forced to give up smoking and drinking his trademark Jack Daniel’s and Coke.

In a interview with Landry.Audio, which recently surfaced online where Ian talks about Lemmy, the guitarist says: “He literally almost lost a couple of toes because when he was in the throes of figuring out the diabetes, a couple of his toes went black from bad circulation.

"He saw a doctor in Los Angeles and they said, ‘You're gonna lose the toes.’ He was, like, 'I need a second opinion.' He flew back to London and saw a doctor there. It was the same thing, 'We need to get these off. It's an emergency.'"

Ian continues: “He goes to have the surgery and he's sitting in this office and he's smoking a cigarette and someone tells him, 'You're not allowed to smoke in here! Are you crazy?’ And he said, 'Well, if I'm gonna fucking lose a toe, I'm gonna have a fucking cigarette.’

Ian reports that Lemmy then visited another doctor, who told him that if he made changes to his diet, his feet would be fine.

Ian adds: “He changed his diet and he didn't have to have his toes cut off. So a cigarette literally saved him from having a part of his body amputated.

“That's when he started using Diet Coke instead of regular Coke, I believe. The doctor literally told him, ‘Switch to Diet Coke and you don't have to lose your toes!’”