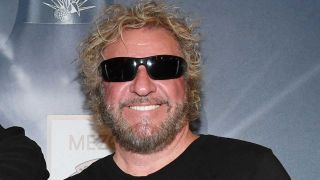 Sammy Hagar has revealed that he wouldn’t want to participate in a Van Halen reunion.

Speaking to Classic Rock, the former VH singer revealed that he has been reticent to contact his former bandmates Eddie and Alex Van Halen in case they thought he was trying to engineer a reunion.

“I’m afraid if I ever reached out and really tried to contact Ed and Al, they would think that I was trying to get back in the band or I was trying to do a reunion,” Hagar tells Classic Rock. “And I'm not. I am so content with [current band] The Circle – we play the Van Halen songs that I wrote with Ed as good as anybody, but I’m happy to have just five or six Van Halen songs in my set. It's almost like I don't want to be asked to do because i'd feel like I had to do it, but I don’t really want to. I'm sorry I don’t.”

“It’s about the division between good and bad,” says Hagar of the album. “All these big corporate guys that are billionaires to begin with ripping off their employees, people bombing churches, the right hating the left, the left hating the right, the blacks hating the whites. It used to be that you could go to hell, the devil was somewhere else. But the devil is at sea level now. The solution lies in the space between us – that handshake in the middle.”

Space Between is out now via BMG