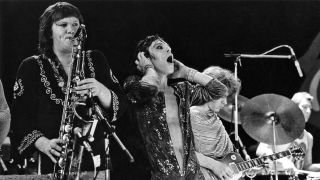 The Rolling Stones say they’ve been devastated by the death of saxophonist Bobby Keys, who passed away yesterday at the age of 70.

He’d worked with the band since 1969 and only stepped down in October due to ill health, with the band saying he hoped to be back after a short break.

Mick Jagger and co say via Facebook: “The Rolling Stones are devastated by the loss of their very dear friend and legendary saxophone player, Bobby Keys. Bobby made a unique musical contribution to the band since the 1960s. He will be greatly missed.”

Guitarist Keith Richards wrote a personal note and published it via Twitter. It reads: “I have lost the largest pal in the world and I can’t express the sense of sadness I feel – although Bobby would tell me to cheer up. My condolences to all that knew him and his love of music.”

Michael Webb, who played keyboards with Bobby Keys And The Suffering Bastards, reported his colleague’s death yesterday, saying he’d been suffering with liver problems for several months. Webb added: “He was a good friend and an inspiration to play with.”