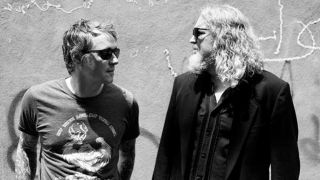 So Prog got together with the two protagonists who talked us through every track on Rise Twain...

B Kull: JD played me the opening chords to this song one night on my piano and I thought two things: (1) This is the opening track and (2), I need to write the words. Both happened. I love the waltz feel, and the simple yet rich arrangement. The back and forth of our vocals solidify how we work and underscore the duo nature of this project.

JD Beck: Death, Rebirth, Afterbirth, and the board-shaking sultry waltz in between. This song is like a naughty N’Orleans back-house parlour on a muggy bayou in a desperate summer night. It’s like a fever of tidal yearnings that takes hold of one’s moral desecration ceremony and makes a funeral march of it while twisting in the arms of a lover. It cries at the sweat of the stranger’s nape and calls out like Nosferatu to the drawling, with tongue of virtue, knowing in this moment the sweetest wine or needle prick.  No matter how sweet the moment that you leave cowering from those shaking boards into that balmy night while looking back in terror… You know you will return. “There’s so much to live. Will you quit in your time?”

B Kull: I just love the unique quality of this song. It feels cinematic. “The grass is greedy; it’ll keep you for a while.” This line feels timeless and poetically beautiful when existentially contextualized. A song of war, conflict, and the pointlessness of it all. The opening rhythms shift, blur, and then reveal the never-ending pulse of time marching on –regardless of our hard-held beliefs and experiences.

B Kull: Lit up is for the chemically addicted. Like a biological cocktail containing dopamine, oxytocin, serotonin, and endorphins, these motivators induce a sense of happiness, wellbeing, bliss, reward, empathy and other associated “good’ feelings. With that said, I also wonder how we are able to so deftly compartmentalise what we see and do to justify our bad behaviour and that of others. Is there a chemical that allows this... or is the pool of sweet denial that easy to wade into? I would think booze and other external intoxicants can help quell that din. We lock things away in the deep corners of lost rooms in our memory schema, hoping to be free from their calls. But are we ever really free, or do those unpleasantries howl and groan, banging on inner doors till the very end, like revolting angels screaming their terrible siren songs?

JD Beck: A ballade celebrating the chaos of our life. Brett said it so eloquently above. The one thing I would add is that ‘moment of clarity’ that hits us all in that whirling daze we humans put ourselves through - either celebration, destruction, inebriation, sobriety/inebriation, or whichever state that may divide and show a light. That moment says it all. It’s an interior archeological dig to find the origin of what truly defines us and makes us as individuals ‘free’.

B Kull: This is a Jackson Pollack convergence in which meaning is scrambled like a sentence employing the cut-up (découpé) technique. Like connected words, the sections are laid out to create meaning for the viewer. I know what this song means to me… What does it mean to you? The characters come to life in the story from my experiences and the meaning I inject. I hope you can find something in this song as well.

JD Beck: To me, this work is a letting go, a reminiscence, and a wishing reach for that time or event where life was fully activated and you were there engaged – whether in love, busy creating, or living the best moment so far in your life. “The shape stayed of your body, the warmth faded from time’s waste” and “if you could’ve stayed over”, meaning it should’ve never ended but, like Summer, the seasons change eventually. “You’ve fallen and there’s no coming back”, the latter half of that quote is a reoccurring theme in the record. The only permanence is change.

B Kull: Perhaps a suicide note, perhaps a moment of acceptance, hope, or simple observation. It is unafraid. I can relate to all of this and more. Can you?

JD Beck: It’s a lovely tune. It’s an elegy of sorts. It tells me of someone trying desperately, through recall, to return to the origin of equilibrium, i.e., their return to center where there is control over chaos and a view of peace. It’s a Dear John. It’s a list of how to get through another day written by someone who promised peace. It’s an acceptance that they are never coming back. It’s a deep breath. It’s a moving on.

B Kull: A dark candle-lit room, bleeding hope under a door forced shut and locked from the outside. JD’s voice is the key.

JD Beck: “You’re somewhere in the sea.” This is a love song. Have you ever met someone who you love and you watch them swerve out of control in their life? You want to tell them they are losing control, but you can’t because it’s their life. You can try and plead but are careful not to because sometimes with someone love is fragile. But then it’s too late… And you wish you did. You wish you had given everything in your strength. You worry and pray (by which ever religious proclivity binds you) to try and hold through the storm. You hope THEY do. Avast! But they become lost in that sea, e.g., the unfathomable unknown, the depthless infinite place, the line where the ocean meets the sky, the possible forever away from you, etc. Yet you keep them in your prayers hoping they come home to you. You have, “given all your years” to it. No matter how far they go, you still love them or maybe, just maybe, what you truly love is the prayer. Perhaps, you’re the one at sea.

B Kull: Rumination is metaphorically similar to burning alive from an incessant heat of grinding thoughts. It is drowning in a slow-motion prison of antipathy, regret, and unhinged hope. It is believing rather than being aware. It is hysteria rather than practical understanding. I think our character in this song is trapped, chewing again and again (in the present) a series of events, perceptions, and wishes – lost and untouchable in his/her past and future.

JD Beck: The teetering on the brink of positive and negative. It’s the ground zero between the polarities. Lines like, “ In a slow motion prison that has you in its hold, you find the hope in all the pulsing waves. It’s a dream that’s there to meet you or dash you in a daze.” The song possibly ends in victory (one perspective) or perhaps set deep in a well looking up at the little hole to the heavens, that unreachable space, wanting to be there.

B Kull: In one sense the narrator is separate, observing and dictating (in this song) what is being seen. There is a Bronze and Iron Age style to what is being described not unlike the narratives told in ancient fables and doctrines. We (the audience) are shown grand events that allude to behavioural catalysts – particularly those of a perceptual nature.

In another sense we have a 1st person confession which understands and perhaps resigns to the power of perceptual influence – though aware of the fabrication inherent in it. Will this individual embrace and walk into the world of a subjective reality, a citizen of Jungian archetypes and their interpretive stories, bowing to the ancient tales, dogma, and all the meaning they empower? To be determined.

JD Beck: “I am going ‘round in a dream…”, a shout out to both the ugliness and wonders of the world; whirling in its numberless goings on, inaudible from the darkest to the lightest, from life to death, a true celebration of life. It’s a hook that uncontrollably sticks with you as you travel through your own life – your own dream.

B Kull: On a mountain, at the highest plateau, is a magnificent building called Love. Many poems and songs have described and paid tribute to the beautiful rooms and hallways contained within this achievement. But upon my stay at the building I became bored with what was offered. I had already known and appreciated the works before I travelled there. Instead I looked for and found the basement of this sometime haughty building. There were no rooms below, just a vacuous reverberant space with a giant coal-stained furnace weighing heavily in a back corner. I walked to it with echoing feet and found boxes of letters…ready to be thrown into the heaving heat which warmed everything above where I stood.  These letters waited stoically to be incinerated and erased. I reached in and took out a single folded letter. This song is what I read…

JD Beck: What is love? It isn’t just all the pretty things, the kisses, embraces, and the rest of only the good and bright or the sweet and perfect. It isn’t laughter only and tears of joy or beating breath of yearn. True love exists. Simply. It’s all those things but is can be tragic as well. It can be balanced with darkness as well as light. It is an homage to the balance (in my view) that speaks to the greatest love; the kind of love that is everlasting. It is a kind of love that has always existed and will much after the last of us walk the earth.

B Kull: This was one from the first batch we started working on. The loud and quiet sections complement each other and add to the emotional turmoil this song exudes. The ending lyric, “You’ll never come back”, was improvised by JD upon a kaleidoscope of textures and sounds I fell into one night – it all makes me weep and is a theme throughout the album.

JD Beck: Stuck in repeat through even the most rudimentary cycle: one of the smallest granules of destruction then a thought becomes an action, a spark becomes a burning countryside, a wish for something better becomes empty hands. We are left, after the fleeting execution of a romantic notion, holding the pieces of that machine whose gear-work was undone by the original granule of destruction. Our poor character is left holding the pieces of what she truly wanted: what they had all along.