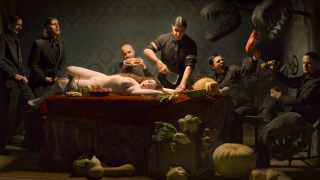 Rammstein are suing the German government for a 2009 ruling which made it illegal for any retailer to advertise their album Liebe Ist Fur Alle Da in the country.

The band filed a lawsuit against the German government at Bonn Regional Court this week, looking for €66,000 in damages which they say was caused by the Federal Department for Media Harmful To Young Persons ‘indexing’ the album in 2009.

According to Deutsche Welle, the governmental agency ruled that the song Ich Tu Dir Weh – along with image sin the record’s booklet – were “brutalising” and “immoral.”

When an artwork is indexed, it cannot be advertised and can only be sold under strict conditions. The indexing on Liebe Ist Fur Alle Da was overturned after six months when a Cologne court said the classification was unlawful.

But the band say they had to destroy or store 85,000 copies of the record in that six month period, impacting on sales numbers.

Rammstein have a number of tour dates lined up for 2016, including a headline appearance at Download.

Last year, the band teased fans with a studio picture, suggesting work had begun on the follow-up to Liebe Ist Fur Alle Da.