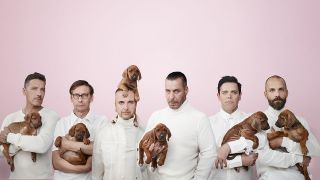 Rammstein’s Christoph Schneider has confirmed that the band have been working on new material.

The drummer was a guest on Radio Rodeo's The BossHoss show when he was asked what Rammstein have been doing during the lockdown.

Schneider replied: “Last week, we were supposed to play our first 2020 concert and then we said, ‘Let’s meet and think about what we could do this year.’

“We still have so many ideas lying around, so many unfinished songs. We met and we’re working on new songs. We want to work on songs, but whether it’s going to be a new record, nobody knows.”

The full interview and a translated clip by Rammstein Belgium can be found below.

Rammstein were forced to postpone both their 2020 European tour and run of North American dates due to restrictions imposed by the coronavirus pandemic.

The European shows have been rescheduled  for 2021 and will take place  throughout May, June, July and August, while the new North American dates for next year have still to be announced.

Last month, Rammstein shared a mini-documentary showing how the various photoshoots for their latest album were created.

The untitled follow-up to 2009’s Liebe ist für alle da launched in May last year, with the band spending four days with Danish photographer Jes Larsen to work on the artwork and shots for the packaging.