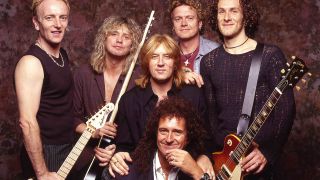 In December last year, it was announced that Def Leppard would be enshrined into The Rock And Roll Hall Of Fame as part of the Class Of 2019.

The ceremony will take place at the Barclays Center, Brooklyn, on March 29, with Def Leppard going into the Hall with Stevie Nicks, The Cure, Radiohead, Roxy Music, The Zombies and Janet Jackson.

It was first time Def Leppard had been nominated for the honour – and it’s now been confirmed that Queen guitarist Brian May will personally induct the Sheffield heroes into the Hall Of Fame.

Upon discovering they had made it in, Elliott said: “First of all, a massive thanks to all our fans and past inductees who voted for us. Congratulations to all our fellow inductees. We stand alongside some amazing artists, past and present. What an absolute honour.”

A list of the other special guests who’ll induct the other artists on the night has also been announced:

Def Leppard topped the annual fan vote and their inclusion means that every artist who has come top of the fan poll since it was introduced in 2013 has gone on to be inducted into the Rock Hall.