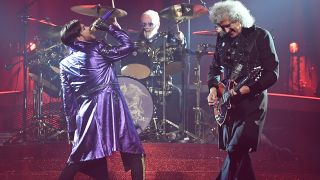 Queen and Adam Lambert have revealed that they’ll perform at this Sunday’s Oscars.

The 91st Academy Awards will take place at the Dolby Theatre in Hollywood, Los Angeles, with the band simply saying that they are ready to rock the ceremony.

The Queen biopic Bohemian Rhapsody is up for five Oscars on the night, shortlisted in the Best Picture, Best Film Editing, Best Sound Mixing and Best Sound Editing categories, while Rami Malek – who portrays frontman Freddie Mercury in the film – has been shortlisted for Best Actor.

Bohemian Rhapsody will be arrive on DVD, Blu-ray and on 4K digital on March 4 via 20th Century Fox Home Entertainment – and to mark the home release, Queen have announced a global initiative to support the Mercury Phoenix Trust.

Queen want fans to recreate the ‘stomp, stomp, clap’ beat from We Will Rock You and share it on Facebook, Instagram or Twitter using the hashtag #Stompforqueen. Text FREDDIE to 70085 to donate £3 to the trust.

The Mercury Phoenix Trust was founded by Brian May, Roger Taylor and Queen’s manager Jim Beach in memory of Mercury following his death in 1991. Money raised by the charity funds projects to fight HIV/AIDS across the world.

Queen and Adam Lambert will head out on the Rhapsody tour across North America this summer.