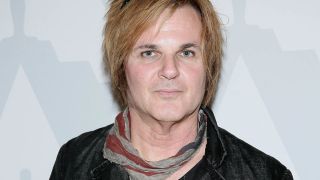 Poison drummer Rikki Rockett has opened up on his battle with cancer.

Rockett developed a tumour on his tongue last summer and underwent nine rounds of chemotherapy followed by 35 radiotherapy sessions.

But with the situation showing no signs of improvement, and facing the possibility of the total removal of his tongue, the sticksman chose an experimental immune therapy called immunotherapy – a treatment which stimulates the immune system to fight cancer. As a result, the tumour has almost been completely eradicated.

He then put his name forward to Dr. Ezra Cohen at the UC San Diego Moores Cancer Center – and waited to hear if he’d be accepted for the trial.

“It was almost like God intervened, ‘For your daughter’s life, I’m going to make this happen.‘”

Poison frontman Bret Michaels said in April that he and the band would wait for Rockett to fully recover before making future plans. And the drummer says a return to action next year could be a possibility.

He says: “My understanding is there is a possibility for a spring tour on the table. I don’t know the details, but that would be great to look forward to.”

Poison will reunite 'without a doubt' says Michaels