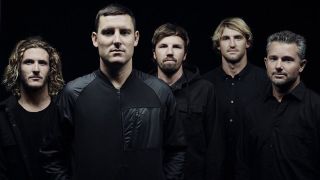 Parkway Drive's Winston McCall says that he thinks the band have outgrown their metalcore tag.

The vocalist took part in a recent Loudwire Facebook Live interview ahead of the launch of their new studio album Reverence, which arrives tomorrow (May 4) via Epitaph Records.

He was asked by one fan if he agreed with the Dutch magazine Aardschok which said that Parkway Drive had “outgrown metalcore.”

McCall answered: “That’s a really good one. Yes, I would agree. Any genre you think of these days is literally just a label so someone knows what you sound like.

"Ultimately, I want people to listen to our music and just say, ‘That sounds like Parkway Drive.’ That’s it. I don’t aim to say we have to be a metalcore band or a metal band or whatever genre. We sound like us.

“Creatively, the older we get, the more stuff we’re going to do. We’re always going to be a heavy band. What do we like doing? Melodic stuff, heavy stuff, things we’re interested in. That actually spans a hell of a lot, so we’re going to keep going to those areas.”

Parkway Drive are currently on tour across the US. They’ll then return to Europe for a run of shows later in the year, which includes a set at the UK’s Download festival.

The band are also featured in the brand new issue of Metal Hammer magazine, which is on sale now.