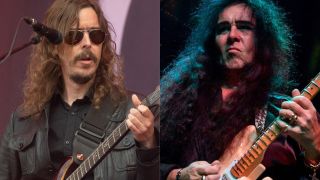 Opeth’s Mikael Akerfeldt has been speaking with Music Radar about the guitarists who have inspired his work throughout the years.

While he picks out artist including Ritchie Blackmore, Tony Iommi, Andy Latimer, Jimi Hendrix and Gary Moore, he also mentions Yngwie Malmsteen, who Akerfeldt admits he has a love/hate relationship with.

“I saw his latest video for his blues album, which I thought was appalling, cruising down the Miami streets in his Ferrari. That’s not what I think of when I think of blues. It’s pretty horrible.

“His records have been pretty fuckin’ shit for a long time, but the guitar playing has always been great. The last one I loved was Odyssey, but now I just sound like a disgruntled Opeth fan. After that, he went a bit cheesy and got really bad.”

Akerfeldt adds: “I feel like he should take care of his career better and maybe calm down a bit, focus on writing great songs. He’s not giving himself the credit he is due, he just wants to carry on playing neoclassical at full distortion.

“But I still love him – he’s on this list, which is proof enough right?”

Opeth will release their new album In Cauda Venenum on September 27 through Moderbolaget / Nuclear Blast and head back out on tour across the UK and Europe throughout October and November.