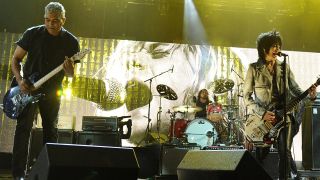 REM frontman Michael Stipe last night described Nirvana as having "captured lightning in a bottle" as he inducted them into the Rock And Roll Hall Of Fame.

And late frontman Kurt Cobain’s widow abandoned her planned speech to hug his bandmates Dave Grohl and Krist Novoselic, seeming to bring decades of feuding to an end.

The band’s contribution to music was celebrated with an all-star tribute act featuring the surviving members plus Joan Jett, Kim Gordon, Lorde and Annie Clark.

Stipe said: “The potency and the power of their defining moment has, for us, become indelible. That voice – Kurt, we miss you. I miss you. Nirvana defined a moment.”

Grohl said: “I was lucky enough to grow up in a musical family in an environment that encouraged music. Parents that never told me not to listen to fucking Slayer.”

Novoselic told the crowd: “Nirvana fans walk up to me every day and say thank you for the music. When I hear that, that reminds me of Kurt.”

Love, visually moved, simply said: “ I just wish Kurt was here to hear this. He really would have appreciated it.”

Nirvana was inducted at a ceremony in Brooklyn alongside Kiss, Peter Gabriel, Linda Ronstadt, Cat Stevens, the E Street Band and Hall and Oates.