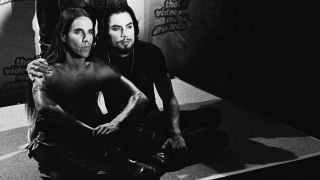 Audio of the band performing the track Circle Of The Noose can be streamed below. It is believed to have been recorded as the band were writing for what would have been the follow-up to 1995’s One Hot Minute.

Those sessions were abandoned and Jane’s Addiction man Navarro was later replaced by John Frusciante, who he had replaced in 1993. One Hot Minute ended up being Navarro’s only album with the group, who went on to release Californication in 1999.

Navarro previously referred to Circle Of The Noose as “the greatest pop song I’ve ever been a part of” and this week he responded to the leaked stream by saying on Twitter: “Wow, what a trip down memory lane! Thanks.”

RHCP will play at this year’s Reading and Leeds festivals and their 11th album is expected to be released in 2016.