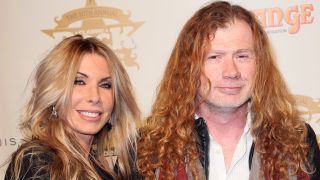 Megadeth mainman Dave Mustaine has revealed he endures a recurring nightmare about the world ending while he’s playing a show.

He received the Metal Guru award at the Classic Rock Roll Of Honour in Los Angeles this week.

Mustaine tells Guitar World: “I have a recurring nightmare where I go onstage and pick up my guitar and it’s strung upside-down. I have to play left-handed.

“Or – and this is the big kahuna – I dream that I’m playing and the end of the world happens right there.”

And he says he only took up guitar in the first place because of his sister. “She sucked at piano, so I just did it to drown her out,” he explains. “It’s the truth. My ex-brother-in-law had a guitar and loaned it to me one day, and I knew that’s what I wanted to do.”

Mustaine has also revealed that Megadeth are gearing up to start work on the follow-up to 2013 album Super Collider. Speaking at the Classic Rock Roll of Honour, he told Nicky Horne, host of the Classic Rock Magazine Show: “We’re commencing the writing process right now and we’re going to start in January of next year. We’ll be touring in August with a very huge English metal band in the States in South America, and we’re hoping to get our record out sometime in the summer.”

One of his favourite moments of the evening was finally meeting Queen counterpart Brian May. “I’ve played one of his guitars prior to meeting him. It’s a little scary to say, ‘Dude, I was playing your guitar – but you don’t know it.’ It actually belonged to someone who was mixing a record of ours, so it wasn’t like I had gone into his house and done it or something!”