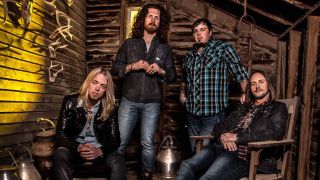 Black Stone Cherry bassist Jon Lawhorn has apologised to Motorhead after saying late icon Lemmy and his bandmates had continually offered them cocaine on tour.

In a recent interview Lawhon spoke about the bands’ road trip together in 2010, telling RockSverige: “All of them, not just Lemmy, all of them, would offer us whisky and coke every day. Whisky and cocaine. Every day we’d tell them no.”

That led to a rebuttal on Motorhead’s Facebook page, where a post read: “Mikkey has never done drugs. The only coke Lemmy loved went in his Jack Daniels. Sad to see people the band helped lie. An apology would be the decent thing.”

Lawhorn later posted: “I am deeply sorry for any harm that I may have caused the Motorhead camp. Let me make it crystal clear that we were never offered any substances by Lemmy, Mikkey, Phil or their stage crew. We were offered substances by now former employees of the band while on tour with them and I should have made that distinction in my interview.”

He added: “What was intended to be an off the cuff, light-hearted road story, I now see, regrettably hasn’t come across that way. For that I am deeply sorry in a way that words can’t properly convey.”

Black Stone Cherry are currently touring the US, with Australian and further North American dates to follow.