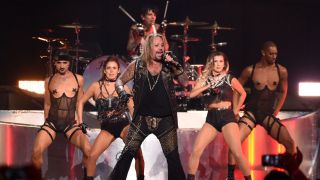 Motley Crue have recalled how a German beer brand inspired them to use umlauts in their logo.

The band say an advert for Lowenbrau – and an unspecified number of bottles of the beer – led to them using the linguistic marks in their logo.

An Ultimate Classic Rock video on the band quotes Vince Neil as saying: “When we came up with the name, we didn’t even know what umlauts were. We were drinking Lowenbrau and when we decided to call ourselves Motley Crue, we put some umlauts in there because we thought it made us look European.

“We had no idea that it was a pronunciation thing. When we finally went to Germany, the crowds were chanting ‘Mutley Cruh, Mutley Cruh. We couldn’t figure out why the fuck they were doing that.”

Crue are currently on their farewell tour, which binds the band to never again perform under the name Motley Crue once it comes to an end in 2015.