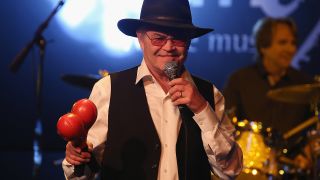 Micky Dolenz has reflected on the time that The Jimi Hendrix Experience opened for The Monkees.

The vocalist and drummer was speaking on the new episode of AXS TV’s Mixtape show, which will be broadcast on Halloween at 8.30pm ET.

In a preview clip, Dolenz explains just how the unlikely partnership came about – and it all stemmed from seeing Jimi in 1967.

Dolenz says: “At the time, we were looking for an opening act. I’m at the Monterey Pop Festival and all of a sudden these three guys come on stage in all these psycho-jello clothes and stuff, and they just looked incredible. That was, of course, The Jimi Hendrix Experience.

“I suggested to the producers of our show that would be a really cool opening act because they were very theatrical and The Monkees was this theatrical act.”

“He did six or eight shows with us, and he was a great guy, a great kid. We had a lot of fun.”

On Thursday night's episode, Dolenz also reveals how he learned to play drums, chats about his musical influences, and talks about his tour It Was Fifty Years Ago Today – A Tribute to The Beatles’ White Album.