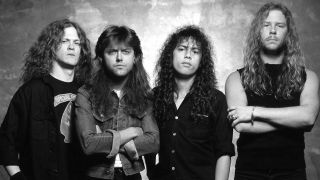 Metallica have released a stream of a remastered version of Dyers Eve along with a live recording of Eye Of The Beholder, which was captured in London in 1988.

Both tracks have been taken from the recently announced …And Justice For All reissue, which is set to arrive on on November 2 via Metallica’s Blackened Recordings on CD, 3CD expanded edition, 2 x 180g LP, cassette, on digital platforms and a limited edition deluxe box set.

Listen to both tracks below.

The limited edition deluxe box set will come with the remastered double 180g LP, a One 10-inch picture disc backed with a live recording of Seek & Destroy from Dallas, a live show recorded in Seattle in 1989 across 3LPs, 11 CDs of unreleased demos, rough mixes, interviews and live tracks, 4 DVDs, four patches, a Pushead print, a tour laminate, lyric sheets, download card and a 120-page book.

The album is now available for pre-order, while a full list of contents can be found on the band’s website.

Metallica are currently on the latest North American leg of their WorldWired tour, with the next show taking place on Saturday night at the Alerus Center in Grand Forks.