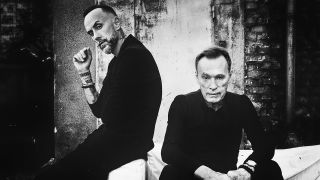 Adam ‘Nergal’ Darski has confirmed that he’s parted ways with John Porter in his Me And That Man side project.

The pair released the album Songs Of Love And Death last year via Cooking Vinyl, which marked a radical departure from Darski’s work with Behemoth.

And in a new interview with uDiscover Music at last weekend's Ramblin' Man Fair, Darski has said he’s moving on with the band without Porter – and he has ideas for a new album which should be released at some point in 2020.

Darski says: “I used to work with guy called John but he left the band so now it’s pretty much me riding this train."

Asked if the band will get a name change going forward as a result of Porter’s deeprture, Darski replies: “That’s quite possible because there’s definitely going to be a record, probably recording in 2019.

“We’re already fucking around with ideas so we might see the light of day in 2020.”

Darski reports that he’s open to working with other artists on the next record and adds: “I already have a concept that I don’t want to spoil now, but I think it’s pretty spectacular.”

As for the reasons behind the split, Darski says: “I’ll try to be as diplomatic as I can – it wasn’t the easiest collaboration in my life.”

Behemoth, meanwhile, are currently putting the pieces in place for the follow-up to 2014’s The Satanist.