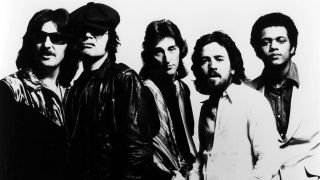 Welsh outfit Man will be the subject of their first-ever museum exhibition next year, marking their five decades of musical achievement.

It was inspired after lifelong fan John Bannon revealed some of his memorabilia collection in a video tribute to late guitarist Micky Jones in 2010. Many of his items, including shirts, posters, badges and setlists, will be on display.

The exhibition opens in Swansea Museum on January 23 and closes on March 21. It ties in with the publication of fellow founder Deke Leonard’s fourth book, Maximum Darkness: Man On The Road To Nowhere.

The Evolution Of Man: Acid Rock From Wales 1965-2014 notes the formation of the Bystanders, which became Man three years later. It traces the recording of debut album Revelation at the Langland Hotel in Swansea in 1969 and follows their career to venues including San Francisco’s Winterland and London’s Albert Hall.

The current lineup of Man, led by Martin Ace, will release their album Reanimated Memories during the course of the exhibition. Find out more.