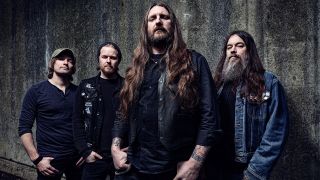 Orange Goblin - The Wolf Bites Back

Orange Goblin have released a stream of their new single Sons Of Salem.

It’s the first material taken from the band’s upcoming album The Wolf Bites Back, which is set to arrive on June 15 via Universal/Candlelight Records.

Orange Goblin frontman Ben Ward says: “Sons of Salem is the first track on the album and we consider it an Orange Goblin anthem. We see this song being a staple of the live set with the singalong chorus and the awesome, catchy riff.

“A mean and moody intro to the album that sets the tone throughout. It’s short, sweet and straight to the point.

“The lyrics are about the sons of the Salem witches returning from the grave to seek vengeance on the religious fools that murdered their mothers during the witch trials.”

The band have also revealed the cover art for The Wolf Bites Back which was designed by Familiar Ink’s Roland Scriver.

Ward says: “We wanted something dark, menacing, striking and memorable all at once and we feel that Roland has certainly delivered that. We think it has the look of an iconic cover, one that you will recognise for years to come and one that perfectly represents the music on the record.

“The wolf is such an amazing beast. The wolf is predatory, vicious and a merciless hunter but at the same time so determined, smart, cunning and beautiful and the portrayal of the wolf about to strike on the cover is a great representation of the way we felt when writing this album.”

In addition, Orange Goblin have today launched their brand new website and store, where The Wolf Bites Back is available to pre-order.

They’ll head out on the road later this month for what will be a run of European festival dates.