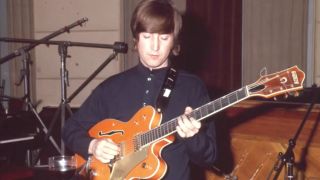 The guitar John Lennon used to record the Beatles’ Paperback Writer is going to auction.

Lennon gave the guitar to his cousin David Birch in 1967 – a year after the single was recorded at Abbey Road Studios, London during the Beatles Revolver sessions. It was their 11th single and it hit the top spot in the UK and US charts.

Birch says: “I was just cheeky enough to ask John for one of his spare guitars. I had my eye on a blue Fender Stratocaster that was lying in the studio, but John suggested the Gretsch and gave it to me as we were talking.”

The guitar has an estimated sales price of between £400,000 and £600,000 and online bidding begins on November 14 via Tracksauction.com. The live auction takes place at Le Meridien Hotel, Piccadilly, London on November 23, where over 100 lots of Beatles memorabilia will be available.

Included in the auction is a copy of the Sgt. Pepper album, signed by all four Beatles, items from the collection of Lennon’s friend Pete Shotton and the banjo used by Rod Davis in Lennon’s The Quarrymen.