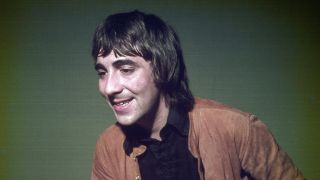 The Who drummer Keith Moon once burst naked into a London nightclub and scared off a shocked Yoko Ono, according to Lemmy.

The Motorhead frontman says the iconic Who drummer turned up at London’s Speakeasy club – riding naked on the bonnet of his Rolls-Royce, before heading inside and making a beeline for John Lennon and Yoko.

Despite still showing the signs of the illness that led to Motorhead pulling the plug on their European tour earlier this year, Lemmy appears relaxed and in good spirits as he tells his story.

He tells Bizarre Guitar: “Townshend was always writing songs somewhere, and Daltrey was up on his trout farm.”

“Keith came down stark naked on the front of his Rolls-Royce one night. His driver Dougal took him down to the Speakeasy club where we always used to go. Moonie ran in and went in the restaurant, and John Lennon was in there with Yoko.

“And he said, ‘Hello John, how you doing?’ With his dick out, you know. And Yoko goes, ‘Ah that’s it!’ out the door. John goes, ‘Fucking hell Keith, look what you’ve done now.’

“And Keith says, ‘It was the only way I could get you on your own, old boy. Let’s have a drink’.”

Lemmy was presented with the John Entwistle Bass Legend Award at The Ox & The Loon event at the House Of Blues in California. Motorhead are set to perform as part of the Motorhead’s Motorboat cruise tour with Megadeth and Anthrax in September.

Lemmy on The Who, Lennon and Yoko