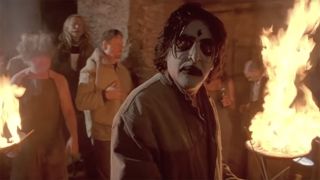 Killing Joke frontman Jaz Coleman says he could have saved the late Heath Ledger if he had known him.

Ledger died in 2008, with a toxicology report finding that the Australian actor died from an accidental overdose.

And in a new interview with the Life In The Stocks podcast, Coleman says Ledger based his Joker character in 2008 Batman flick The Dark Knight on Jaz in the music video for Killing Joke's Hosannas From The Basement Of Hell.

Coleman says: “Petr Zelenka, who was the director of 2002 film Year Of The Devil, directed the video for Hosannas From The Basement Of Hell.

“I was drunk and overweight and fucking nasty – and stills from that video were used by Heath Ledger, who studied me for that part as the Joker in The Dark Knight over and over again.

“He had pictures and stills of me everywhere. I was overweight and fucking drunk and smashing things up and fucking going mental. He used that from Hosannas and other stuff he’d heard about me as the model for that character. That is true."

Explaining the face-paint he used in the video and what he wears on stage, Jaz adds: "It's because I have some experience with occult forces. It’ll send you crazy, this energy.

“I’ve had a 40-year experience with it. I could’ve saved Heath Ledger if I’d known him. You have to do certain things when you work with these energies. Energies are very real."

Killing Joke are currently on tour across North America, with dates planned through until the end of November.