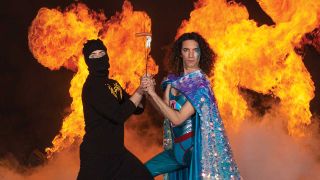 The video finds Ninja Sex Party singer Danny Sexbang addressing his awkward, nerdy younger self – played by Wolfhard – promising that things will improve as he gets older. The lyrics include these lines:

Hey little Danny, don’t you cry
I am you from much later in your life
I know your hair is wild, I know you have no style
You’re still a virgin and you will be for a while

Danny Don’t You Know is taken from Ninja Sex Party's sixth studio album, Cool Patrol, which will be released on August 17. The album is the follow-up to last year's Under the Covers, Vol. II.

Sexbang and multi-instrumentalist Ninja Brian are Dan Avidan and Brian Wecht in real life, who formed Ninja Sex Party in 2009. They tour the US in August and October.