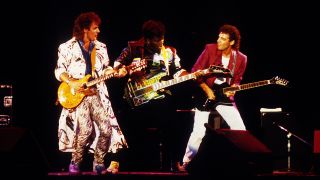 Journey’s Neal Schon has confirmed that the band’s former bassist Randy Jackson has returned to the group.

In addition, drummer Narada Michael Walden has been brought into the fold to complete the new-look lineup.

The news comes after Ross Valory and Steve Smith were dismissed from Journey back in March over claims the pair had attempted a ”corporate coup d'état" to gain control of one of the band's business entities, Nightmare Productions, and take control of the Journey name.

Jackson played with Journey between 1985 and 1987, playing on the band’s 1986 album Raised On Radio, while Narada Michael Walden is known for his extensive production work and solo career, and has previously played with artists including Jeff Beck, Carlos Santana and Robert Fripp and the Mahavishnu Orchestra.

Guitarist Schon said on Twitter: “OK, friends, the word is out. Randy Jackson, the Big Dawg, is our new bass player again.”

He then added: “Narada Michael Walden is our new drummer. Multi-talented songwriter/producer, Mahavishnu Orchestra. The J Boyz will have a new strut.”

Replying to comment that Journey were an “ever-changing unstoppable force,” Schon replied: "Couldn’t agree more. This is a completely new chapter for us and can’t wait to get to it.”

Jackson and Walden made their Journey debuts when the band played a lockdown version of Don’t Stop Believin’ for a UNICEF fundraising event on Saturday evening.

In legal papers filed at the Superior Court of Contra Costa County, California, against Valory and Smith in March, Schon and keyboard player Jonathan Cain said they had “lost confidence in both of them and are not willing to perform with them again."

The claim continued, "With their actions, Smith and Valory have destroyed the chemistry, cohesion and rapport necessary for the band to play together. Journey can only tour successfully and succeed creatively if it is united and the band members trust one another. The actions taken by Smith and Valory shattered that trust.”

The King is back 💪🏾🕶 @randyjackson 🔥🔥 Neal Schon Music